Lyttelton-based artist Scott Jackson’s practice falls into a triangular space formed by pop culture (from pre-historic through to contemporary), speculative fiction and the psychology around the sub-conscious and dream worlds. This ‘neverwhere’ holds a rich creative compost from which Jackson’s work takes root. Jackson uses drawing, printing-making and painting to express his often dark but often humorous illustrations of society and the human mind with all its ambiguities. Jackson has long operated within the art world, working for artists and institutions and applying his printmaking to commercial design. His work is held in private and public collections in New Zealand and beyond.

Cameron Ralston discussed Jackson’s work with him ahead of his exhibition So it’s Come to This at City Art Depot from 29 October to 18 November.

Cameron: Your works have strong associations with the human psyche and society – presented as often mutated and wild environments with outlandish figures. How closely are these reactions to, or reflections of, your local environment?

Scott: Well, those aspects of my drawings probably come from instinctive reactions to the people and situations around me – or rather the daydreams and actual dreams they inspire maybe. I’ve drawn strange figures my whole life. I started doodling them so young I can’t even remember to be honest. Maybe sub-consciously I’ve always assumed everyone is quite outlandish ‘on the inside’ if you know what I mean? So the answer is really – the reactions or reflections of my local environment? Not very closely. The ‘wild environments’ are born out of dream-logic. I haven’t really felt obliged to follow any laws of physics or real-life logic when these scenes start to form on paper, I like to tap in to letting my mind wander and work it out as I ramble along… 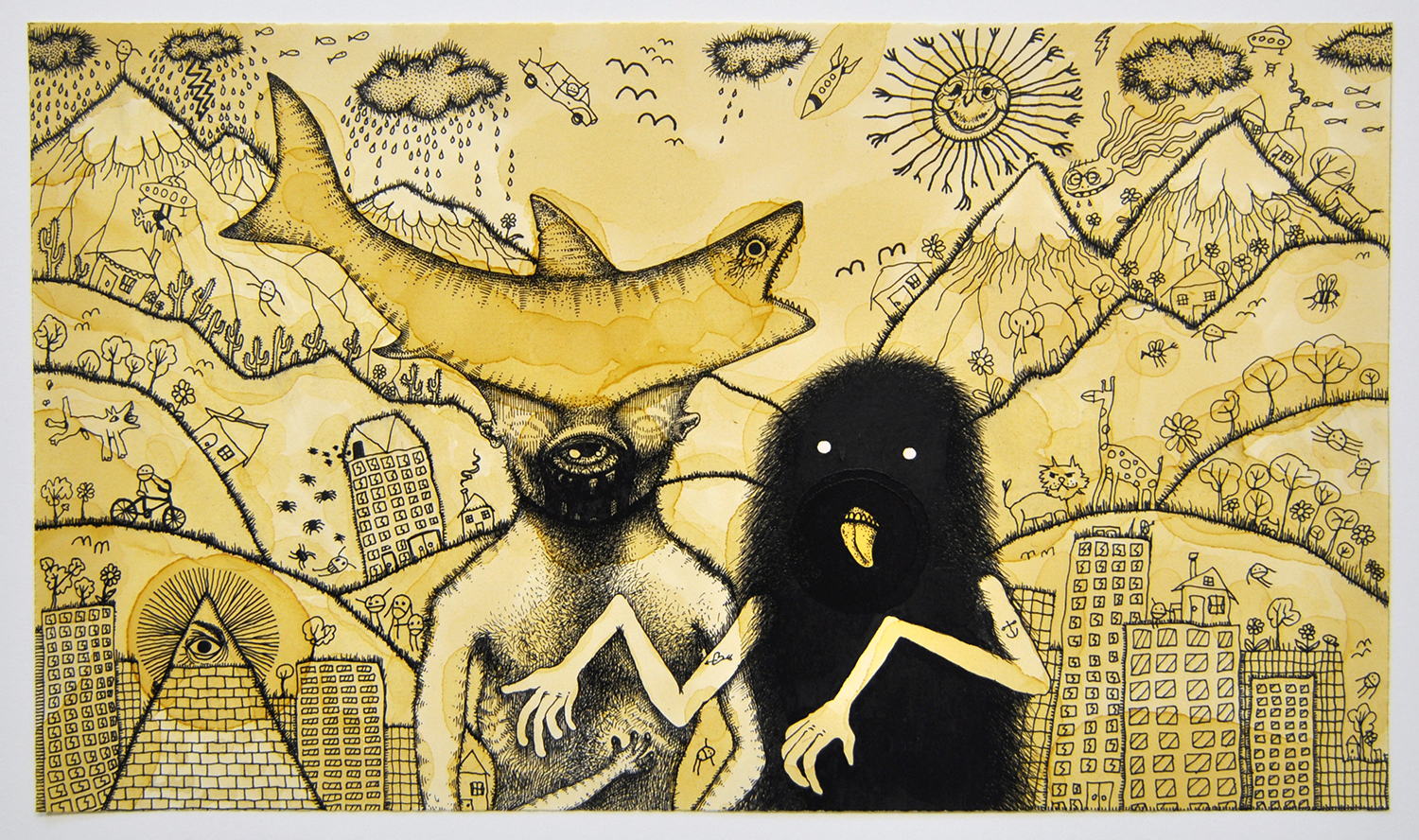 ‘The Nursery’, Scott Jackson, Ink and shellac on paper, 2019

What attracts you to the dark humour you imbue your artworks with?

Hmmm.. I think my own sense of humour has always leaned towards the dark side, maybe I got that from my mother – she worked as a nurse for her whole career. Because my own life has been relatively free of awful stuff, I mean growing up in in suburban New Zealand can have its dark side but in my case I had a pretty stable upbringing, old-school free-range kinda childhood, maybe I have the privilege of being able to explore the funnier side of humanity’s cynical and self-destructive tendencies without getting too depressed about them, or taking them on my shoulders so to speak. 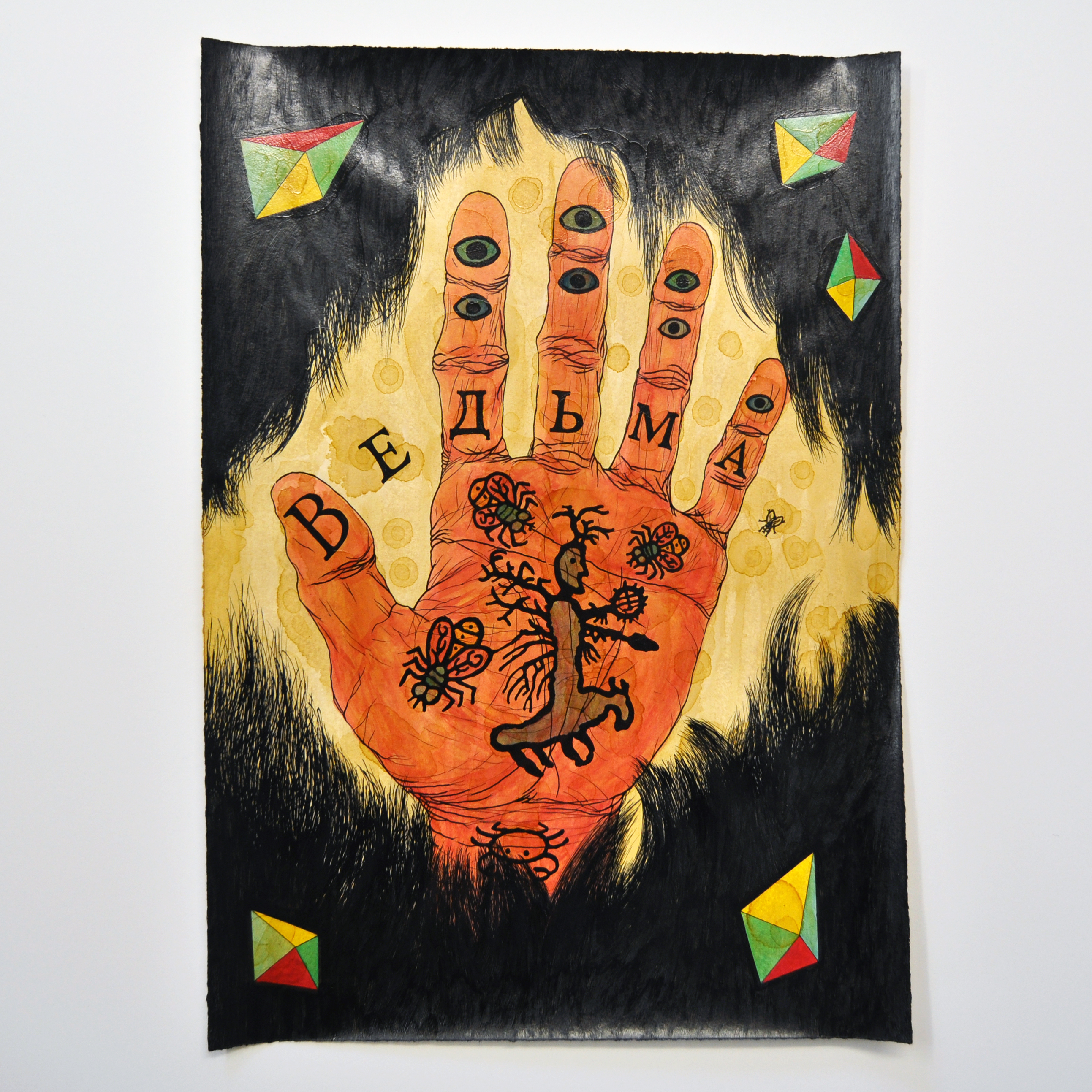 These artworks are chocka full of symbols, primitivism, occultism and the paranormal which would scare the pants off those of firm conservative faith. What do you see the purpose of these being? Can you enlighten me on some of their meanings?

Ha. It hadn’t really crossed my mind that it would frighten religious people but maybe I like that idea. My attitude towards those of ‘firm conservative faith’ would probably be best described as ‘tolerance’ on a good day. I have always loved mysterious-looking symbols. Often they mean nothing at all, they’re there to convey a sense of confusion, to symbolise an ‘unknowable-ness’ or sometimes they only mean something to myself that really wouldn’t make sense to anyone else. I think I feel it’s not in the interests of the artwork to attempt to explain any of them to be honest. Occultists are often pretty interesting people historically and I think I believe that sometimes having a strange sort of… maybe personal one-off religion or ritualistic nature could be fairly useful?

I love the idea that someone could have one of my artworks and it might give their children strange dreams or nightmares. Like something from a Japanese horror film.

You revisit some characters from previous works in this exhibition such as the Evil Cake. What drew you to return to them?

Well, certain artworks or sets of works set up small, surreal worlds of narrative. The most obvious of these in this show would be The Minogue Compound – it explicitly has the story written as part of the work. So just like novels or film or whatever, sometimes characters can re-occur. I liked the idea of some strange figures from my last exhibition getting a bit older and starting a grungy band. Lol.
Also it makes sense to me to have some thread that evolves from show to show, just as I’m still the same person but changed. 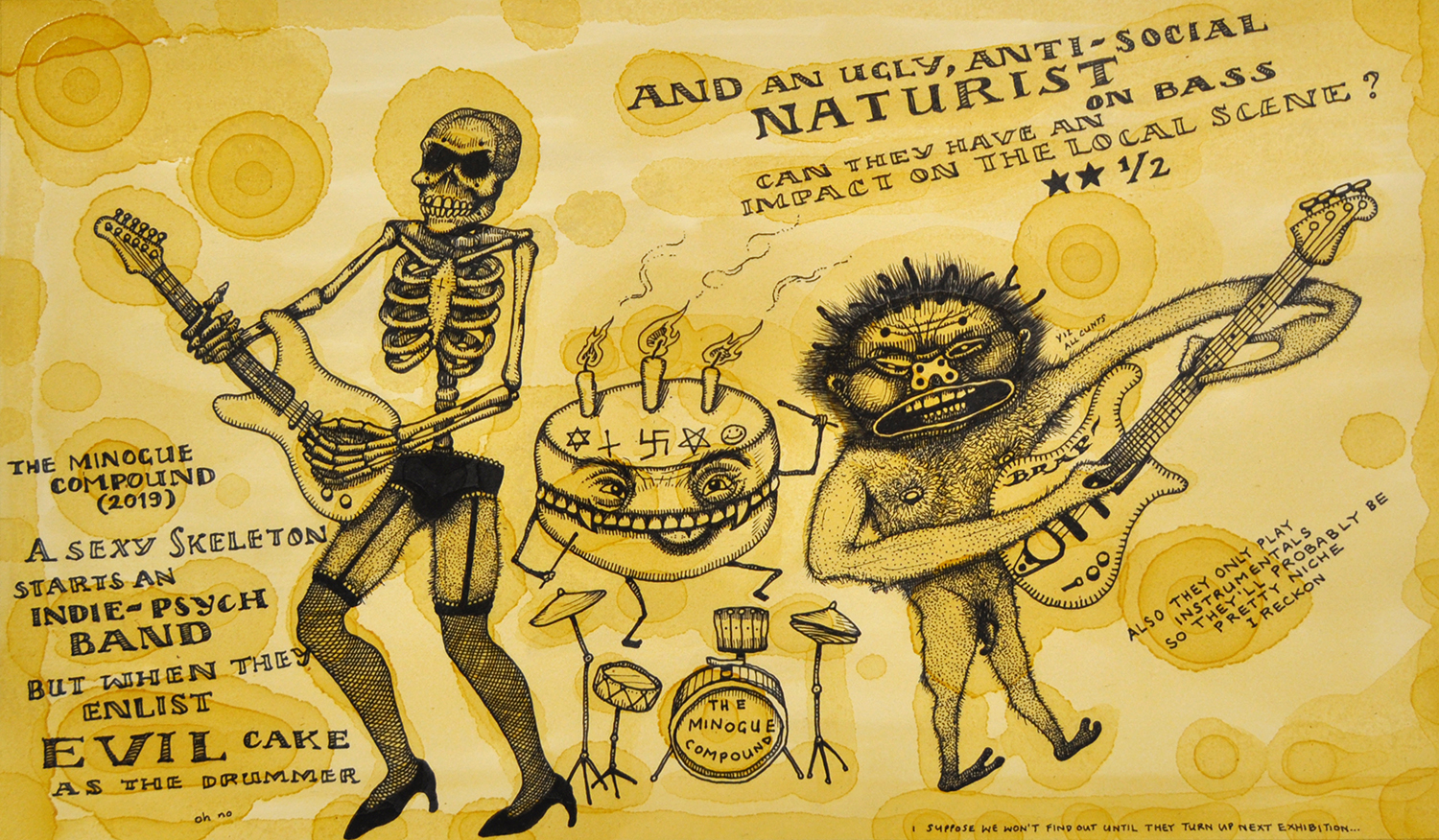 ‘The Minogue Compound’, Scott Jackson, Ink and shellac on paper, 2019

You create strong textures in the blacks and golden browns of the works. Can you tell me about the mediums you choose to use and the way shellac is used. Is there an element of randomness (rambling?) that comes from the mediums or are the compositions planned out?

I generally have a composition in my mind’s eye when I start but it changes as I go along. I have always loved shellac – as a child I was deeply intrigued by the fact that it’s the product of insects. I still find insects fascinating. I like that it’s an old-fashioned product – it’s kind of… imperfect, patchy, it sort of varies from matte to glossy, to crumpled-looking. It’s unpredictable. This particular batch I have is a really beautiful golden colour that I just love – it provides a whole texture and sheen that is a great juxtaposition to the very definite and predictable qualities that pens and nibs and inks have. I use a range of pens, fibre-tipped ones but also nibs for dipping into ink old-school style. Watercolour is also nicely a little difficult to control.

How does the title of this exhibition So it’s Come to This fit with the works?

Well I am one of those people who kinda marvels at the fact that anything exists at all to be honest. The title of the show is meant in a sort of over-arching grandiose way, like a dead-pan, ‘Well the entire universe exists and it’s come down to a bunch of stupid cunning old men bickering over money and power that’ll f*ck us all over.. thanks a bunch.’ Also it could mean just me, my small life: ‘So it’s come to this’. It helps to see the funny ridiculous side of it all. Or not. Ha. 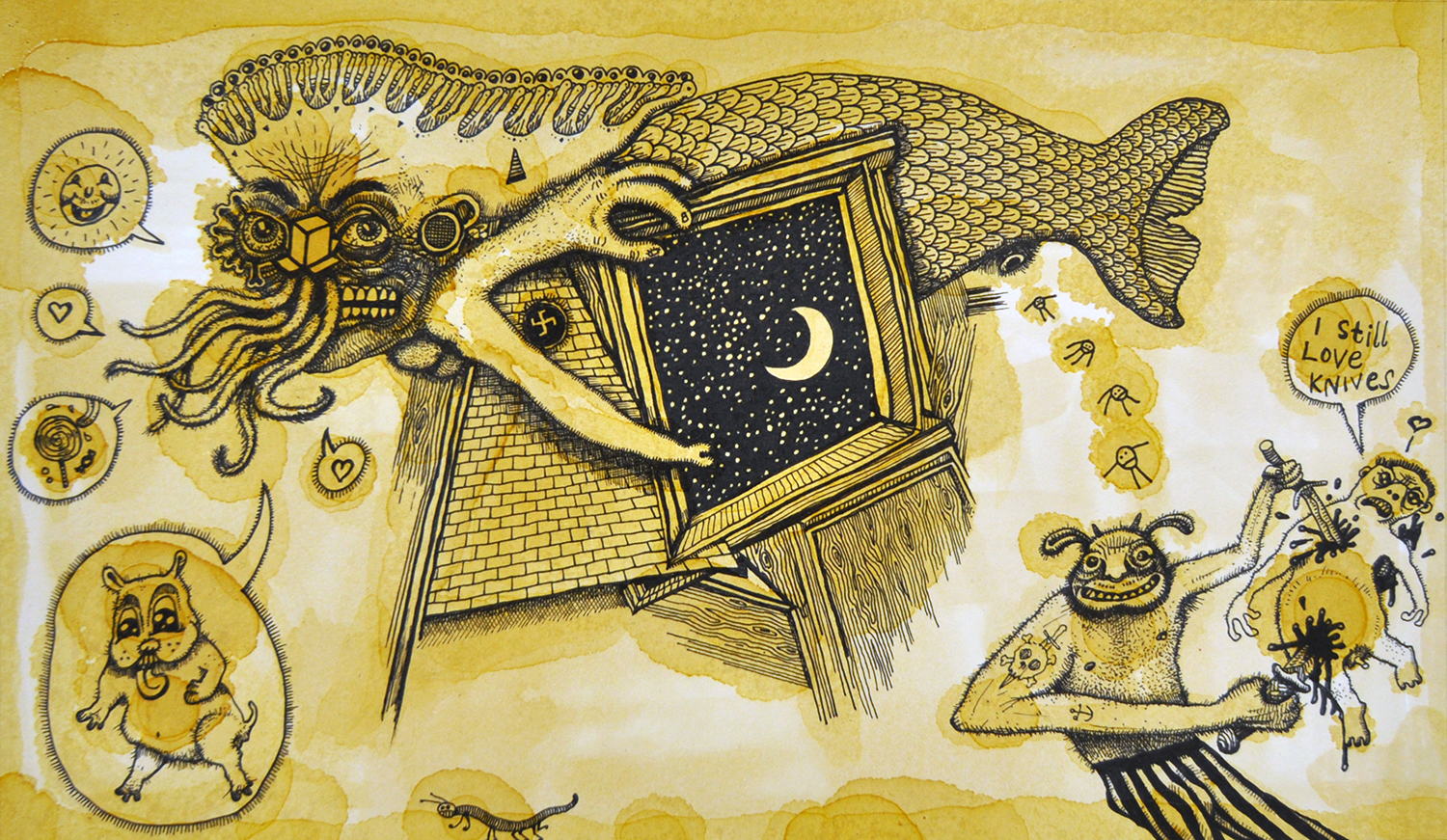 ‘Days of our knives’, Scott Jackson, Ink and shellac on paper, 2019

You are very much involved in the art world outside your own art making, as exhibitions gallery technician at the Christchurch Art Gallery Te Puna o Waiwhetū and as a commercial artist. Essentially you’re constantly in front of artworks. How much do these roles feed into your exhibited artworks?

I feel like on one hand it’s possible to get too cynical about art and the ‘art world’. I think I do end up a bit jaded by art sometimes, but paradoxically I think it makes me much more… appreciative when I do see art I really like. And increasingly nowadays I start to enjoy art I don’t like, almost as if the pointlessness of art is almost what makes it art. If it had other reasons to exist it wouldn’t be art, it would be something else. It’s not pointless I admit, it’s just that its benefits can be either obvious or slippery and difficult to pin down sometimes. It feels like I’m not hugely influenced by the art I see around me constantly but maybe I am and I just don’t realise.

Speaking of influences, how much do you draw from other art forms, such as film, literature and music?

I always break down old films and TV shows and re-assemble parts, sometimes overtly like my last show where I had some linocuts of classic horror figures – I love old horror films as a source, their aesthetic is just quite appealing – but everything from fairytales and mythologies, early literature like Beowulf or Jack the ripper to underground comics, old half-remembered TV shows or films or books. I like the idea of things being confused, the result of a series of inaccuracies or poorly recalled mistakes or badly re-copied accounts. 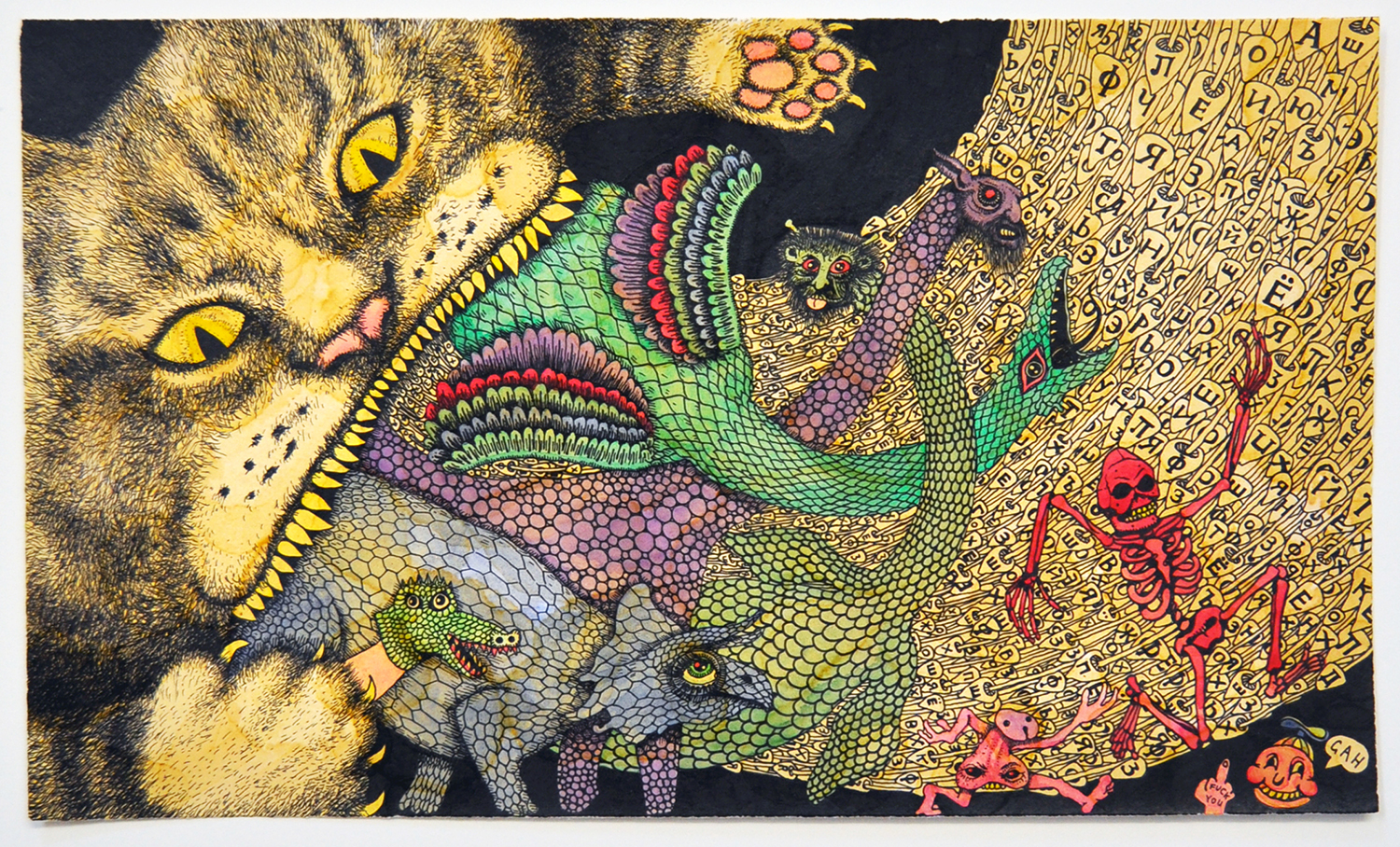 ‘For Margarita’, Scott Jackson, Ink, watercolour and shellac on paper, 2019

If this exhibition in some way addresses where we have come to as a society and species, where do you see us going next? It’s certainly difficult to not be cynical about such things. Maybe humour and surrealism are good ways of getting distance from that bleakness?

Well, if it does address where we have come as a species then it certainly doesn’t offer any solutions ba ha ha. I mean personally, if I constantly thought about where humanity is headed it could get depressing, but conversely there are more people alive having longer interesting lives than there ever has been – I mean, humanity was in a way darker place in 1943 right? I think the difference now is the environmental chickens have come home to roost and whether they’re gonna be KFC in a parking building or a twice-yearly harvest feast in a forest glade around a wicker man, no one person truly knows the future. At least humour and surrealism are two things that aren’t intrinsically negative or depressing. I think the time of feeling hypocritical and guilty because you want to use a car sometimes should kinda be over, and some of the arseholes who enable a heap of really awful stuff to happen have a lot to answer for – I mean, digging up oil to produce throwaway plastic water bottles, that shit should have been knocked on the head about thirty friggin’ years ago, and blaming a thirsty person who buys one is not the correct answer in my opinion.

I see stuff getting worse, but I do have hope that it could get better after that. The tragedy is there’s no justifiable reason for it to have got so bad in the first place and the best-case scenario probably isn’t as nice as everything should have been all along.

So yeah.. slight bummer note. There’s some beer at my opening if that helps to make up for it.. come have one. 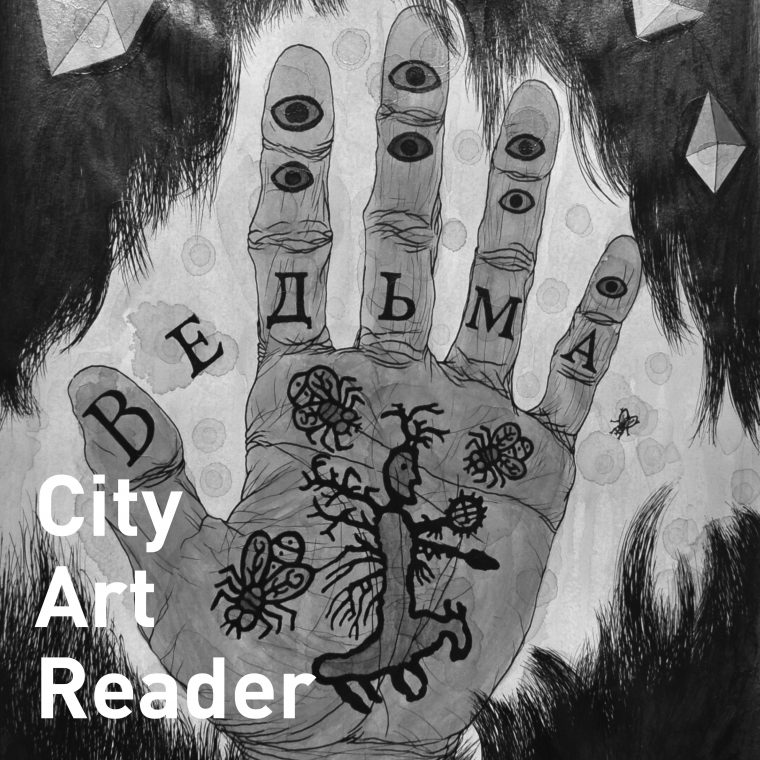 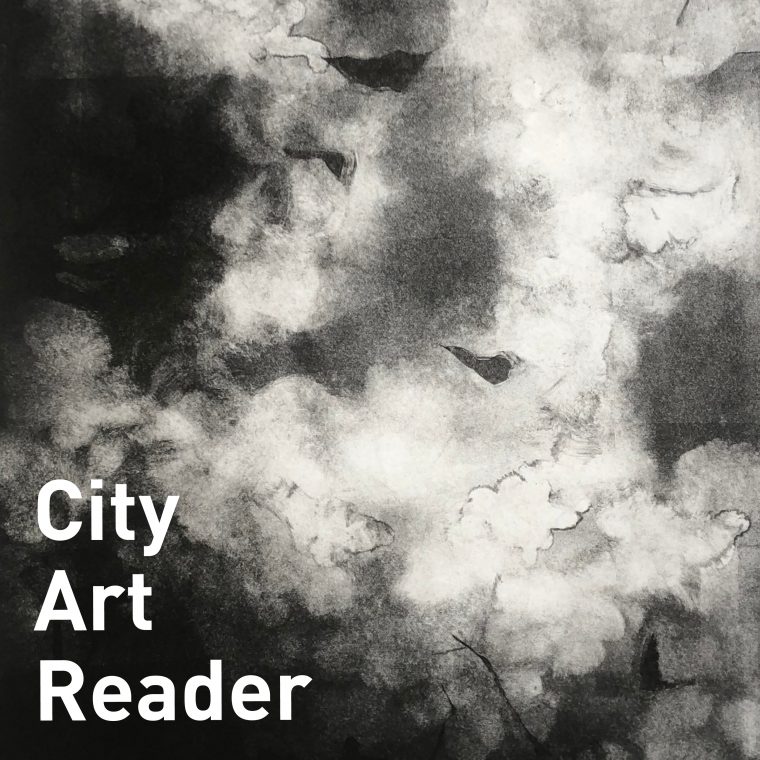 48: Charlotte Watson – No Such Thing as Summer 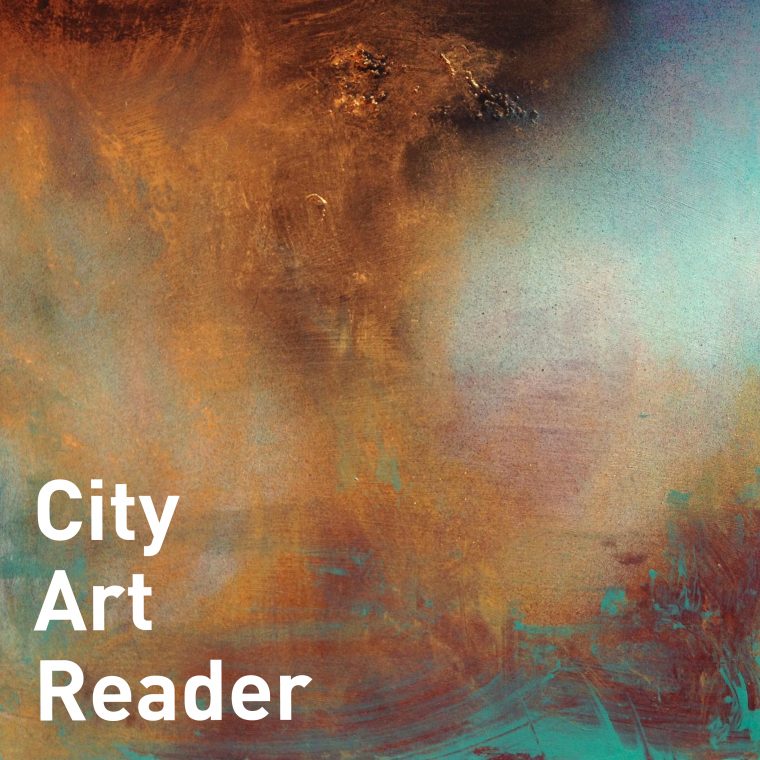